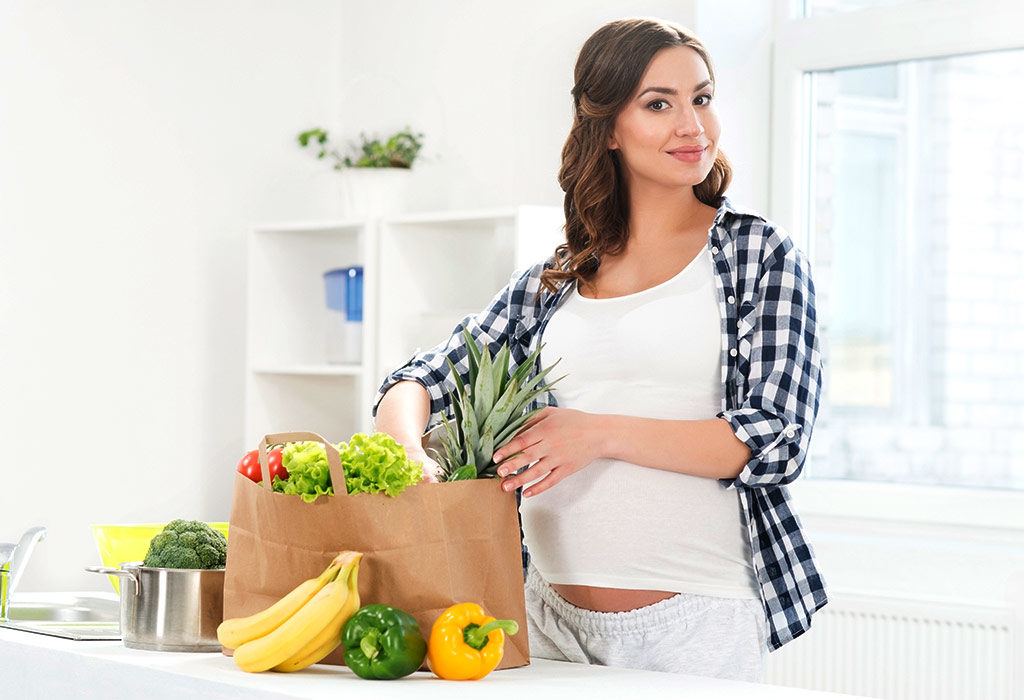 For a healthy pregnancy, the mother’s diet needs to be balanced and nutritious – this involves the right balance of proteins, carbohydrates, and fats, and consuming a wide variety of plants like vegetables, and fruits.

Some women’s diets may be impacted by ethical beliefs, religious requirements, or health conditions, so checking with a doctor is an important part of planning a pregnancy diet.

Fast facts on eating during pregnancy:

Fruits and vegetables are the cornerstone of any nutritious diet, and they are especially important during pregnancy.

As mentioned above, the mother should follow a varied, balanced, and nutritious diet, and it must include:

Aim for five portions of fruit and vegetables per day. They may be in the form of juice, dried, canned, frozen, or fresh. Fresh and frozen (if frozen soon after picking) produce usually have higher levels of vitamins and other nutrients.

Experts stress that eating fruit is usually better for you than just drinking the juice, as natural sugar levels in juice are very high. Consider vegetable juices like carrot or wheatgrass for dense nutrition.

Starchy carbohydrate-rich foods include potatoes, rice, pasta, and bread. Carbohydrates are high in energy, and are therefore an important component of a good pregnancy diet.

Healthful, animal-sourced proteins include fish, lean meat, and chicken, as well as eggs. All pregnant women and especially vegans should consider the following foods as good sources of protein:

British and Brazilian researchers reported in the journal PLoS ONE that pregnant women who ate seafood had lower levels of anxiety compared with those who did not. Pregnant mothers who never consumed seafood had a 53 percent greater risk of suffering from high levels of anxiety, the authors wrote.

Fats should not make up more than 30 percent of a pregnant woman’s diet. Researchers from the University of Illinois reported in the Journal of Physiology that a high-fat diet may genetically program the baby for future diabetes.

There are other risks to pregnancy with an overly high-fat diet, so a balance is needed and monounsaturated and omega-3’s or “healthy fats” should be the primary fat choices. In the journal Endocrinology, a team from Oregon Health & Science University explained that Food and Nutrition Bulletin because the blood flow from the mother to the placenta is reduced.

Wholegrain foods, such as wholemeal bread, wild rice, wholegrain pasta, pulses like beans and lentils, fruit, and vegetables are rich in fiber.

It is important to have a healthy daily intake of calcium. Dairy foods, such as cheese, milk, and yogurt are rich in calcium. If the mother is vegan, she should consider the following calcium-rich foods; calcium-fortified soymilk and other plant milks and juices, calcium-set tofu, soybeans, bok choy, broccoli, collards, Chinese cabbage, okra, mustard greens, beans, kale, and soynuts.

Zinc is a vital trace element. It plays a major role in normal growth and development, cellular integrity, and several biological functions including nucleic acid metabolism and protein synthesis.

Iron makes up a major part of hemoglobin. Hemoglobin is the oxygen-carrying pigment and main protein in the red blood cells; it carries oxygen throughout the body.

During pregnancy, the amount of blood in the mother’s body increases by almost 50 percent – she needs more iron to make more hemoglobin for all that extra blood.

Most women start their pregnancy without adequate stores of iron to meet the increasing demands of their bodies, particularly after the 3rd or 4th month. If iron stores are inadequate, the mother may become anemic, and there is a higher risk of: 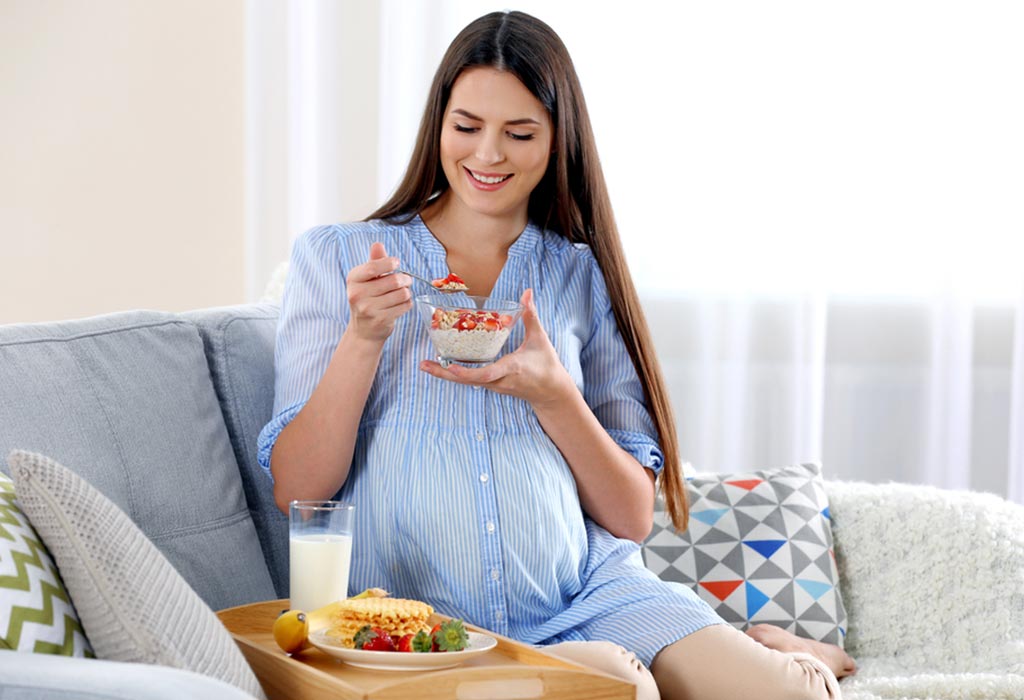 If the mother is anemic later in the pregnancy, there is a higher risk of losing a lot of blood when she gives birth. The following foods are rich sources of iron:

Non-animal sources of iron are less easily absorbed by the body. Mixing some lean meat, fish, or poultry with them can improve their absorption rates.

The following foods are best avoided during pregnancy:

Should I stop drinking alcohol completely?

Only very small amounts of alcohol may be consumed each week by pregnant mothers.

Public health authorities throughout the world have been progressively reducing the maximum amount of alcohol a woman should drink each week.

A fetus’ liver cannot process alcohol anywhere nearly as well as an adult’s can. Too much exposure to alcohol can seriously undermine the baby’s development. Most doctors advise pregnant mothers to avoid alcohol altogether.

Some guidelines recommend only very small amounts per week, if the mother chooses to drink while pregnant. Heavy drinking during pregnancy may harm both the mother and the baby. There is a risk that the baby will develop FAS (fetal alcohol syndrome), so many mothers choose to remove the risk of any issues by eliminating alcohol from their diet during pregnancy. 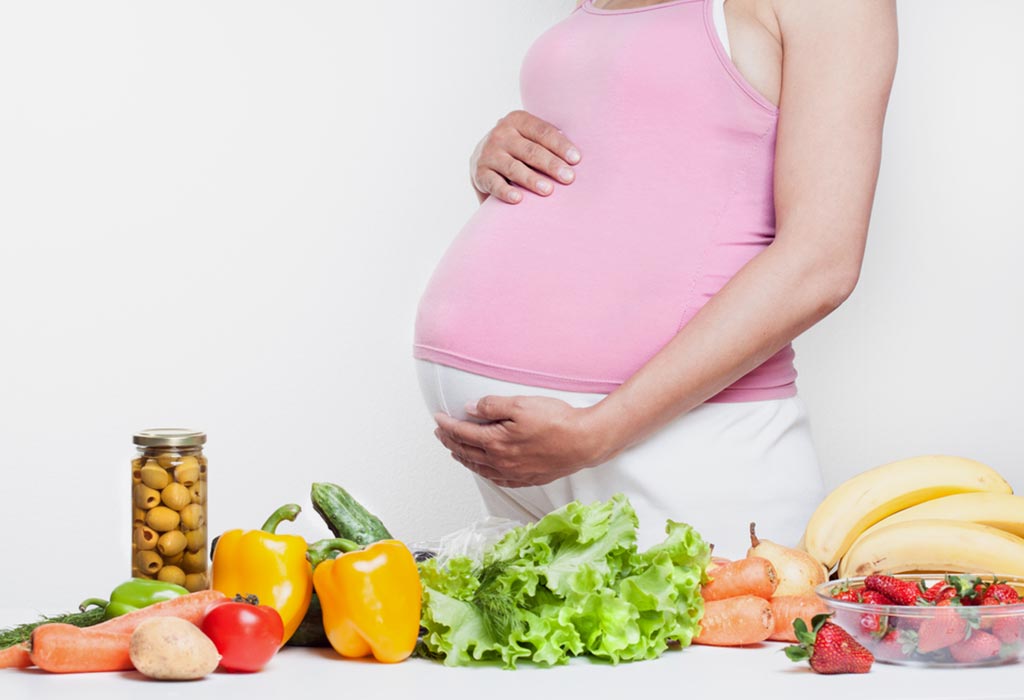 If a pregnant mother consumes too much caffeine during her pregnancy, there is a raised risk of a low birth weight, which can lead to health problems later on. There is also a higher risk of miscarriage.

Many foods and drinks contain caffeine, not just coffee. Examples include some sodas, energy drinks, chocolate, and tea. Some cold and flu remedies also contain caffeine. A pregnant woman should talk to her doctor, nurse, or pharmacist before taking a remedy.

Most health authorities around the world say that coffee does not need to be cut out completely, but should not exceed more than 200 milligrams per day. A standard mug of instant coffee contains 100 milligrams of caffeine.

According to the Institute of Medicine, USA, a woman whose body mass index (BMI) is between 18.5 and 24.9 should gain 25-35 pounds (11.4-15.9 kilograms) during the 9 months. A woman who is overweight at the start of pregnancy should gain between 15-25 pounds (6.8 to 11.4 kg). Weight gain recommendations may also vary, depending on the woman’s age, fetal development, and her current health.

Excessive or insufficient weight gain can undermine the health of both the fetus and the mother.

The information below should never supersede what a doctor tells a patient; it is important for pregnant women to consult a doctor before pursuing any supplementation.

A woman pregnant woman should be consuming 27 milligrams of iron per day. The majority of women can get adequate amounts if they follow a healthy diet. Some, however, may need iron supplements to prevent iron deficiency. Some women may experience heartburn, nausea, or constipation when taking iron supplements. To avoid these problems, they should take their pills with meals, start off with smaller doses and then work their way up to the full dose slowly.

The National Health Service (NHS), United Kingdom, recommends that supplements in the form of folic acid should be 400 mcg (micrograms) per day up to the 12th week of pregnancy. Ideally, women should have been on them before becoming pregnant, the NHS says.

Guidelines in the UK say that a pregnant woman should take supplements containing 10 mcg of vitamin D daily. Summer sunlight is a good source of vitamin D (the light does not have the vitamin, but triggers the skin to synthesize it) – however, exposure should be limited because too much sunlight on the skin can cause burning and raises the risk of developing skin cancer.

A study published in the Food and Nutrition Bulletin reported that observational studies, have shown that “zinc deficiency during pregnancy may cause adverse pregnancy outcomes for the mother and fetus.” After assessing several studies they found that pregnant women on zinc supplements were 14 percent less likely to have a premature delivery.

Pregnant women should avoid having too much vitamin A, as this may harm their baby. The exception to this rule is when a doctor advises it for a specific reason. It may be determined, for example, that a mother is deficient in vitamin A during her pregnancy, in this case, a doctor may advise supplementation.